Stefan Gechev was born in the family of the literary critic and historian Albert Gechev (1881-1916) and the French high school teacher Rada Gecheva.

“I was five years old when my father read the poems by Slaveikov and made me repeat them. I still remember them. If he had not died so early, his university career might have awaited him. But fate … “As a critic … generally speaking, he was for our good, solid realism. I am for the good, solid modern realism.”

…By maternal line, Asen Zlatarov’s mother, my grandfather’s sister, left beautifully written memories that were published. I will not talk about Assen Zlatarov himself. Who doesn’t know him! His son Svetozar Zlatarov also writes. A famous representative of this family is Professor Lyubomir Tenev. My aunt Diana, Nikolay Raynov’s wife, also had literary experimnets. Not to mention their son Bogomil … “

1917-1921 Rada Gecheva works as a French language teacher at the high school in Rousse. Little Stefan is an excellent student, but despite his mother’s efforts, the French language does not attract him. The language he will later accept and speak as his own.
After the death of her husband, Stefan Gechev’s mother left the city of Ruse and settled in 1921, together with her two children – Stefan and Erma, at the house of grandmother Katya in Plovdiv.

1926, Paris  Fifteen-year-old Stefan lives for around two years in Paris, where his mother was sent to specialization. Dora Gabe, Asen Zlatarov, Nikolay and Bogomil Raynov, the great Papazov, as well as many other Bulgarian intellectuals were also there at that time. The Louis’ Lyceum in Paris, where Robespierre had also studied, helps him to perfect the French language and spark his imagination. 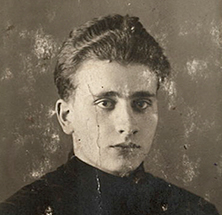 Academician Nikolai Raynov – professor of art history, a famous writer and distinguished intellectual, was an influential figure in the first half of the XX century. As a child, because of his uncle, Stefan gets the chance to meet with almost all the great Bulgarian intellectuals – Geo Milev, the artist Mavrov, the modernist Georges Papazov and the poetess Dora Gabe, as well as many foreigners, as the creator and leader of Dadaism Tristan Tsara in Paris.
Uncle Raynov dedicates eighteen-year-old Stefan to the Orpheus Lodge, to which he was the creator and leader and in which perhaps the greatest intellectuals of the era participated.

When I entered the University of Sofia as a student in Slavic Philology in the fall of 1929, our professors were L. Miletic, S. Romanski, M.Arnaudov, A.T. Balan, St. Mladenov. All these people were a team of talented scientists who laid the foundations for a solid Bulgarian studies… “

In 1934 I graduated from Sofia University. Even at the beginning of my studies, I was drawn to Old Bulgarian literature. My professor in this course, Yordan Ivanov, advised me that if I wanted to create something more serious in this area, I would have to learn both Greek and Modern Greek.

1936,Gechev settled in Athens to study Ancient and Modern Greek
His connection with the spiritual community was so strong that he became very quickly and easily involved in Greek academic circles. In a short time he mastered the Greek language.

I began listening to Professor Weis’ lectures on Byzantine literature at the University of Athens, one of the luminaries, as it was then called, of this science. Soon I introduced myself to him and he showed interest in the young Bulgarian. After a while he called me up and suggested that I do a private volunteer course in Old Bulgarian for some of his students.
Because, he explained, both you need to know Byzantine, and our Byzantines should know Old Bulgarian in order to use the old Bulgarian documents.

In 1938, in Greece, he wrote his doctoral dissertation entitled “Physiologist”, in which he examined an ancient Bulgarian text translated into Greek.
The bibliography takes him to the monasteries of the Holy Mountain (Agios oros)

Stefan Gechev had his own attitude towards God, the Higher Craft, which governs mind and body. The Bible was always with him until the end of his life. Every night, he read a passage from it as a history book, as a Holy Book – a door to other worlds.